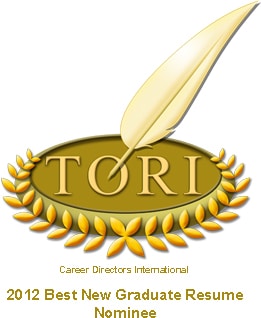 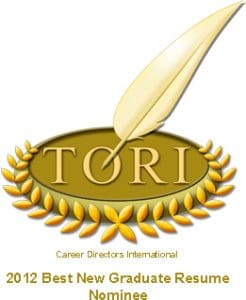 (August 29, 2012 – Melbourne, FL.) – Career Directors International (CDI) is pleased to announce the nominees of the 2012 TORI Awards, also known as the Toast of the Resume Industry. Local writer Adrienne Tom (CPRW, CEIP) and owner of Career Impressions has been nominated in the category of Best New Graduate Resume for the top award.
CDI’s President Laura DeCarlo, proudly states, “While winning a TORI Award represents the pinnacle of resume writing expertise within the industry, nomination for a TORI is one of the most prestigious honours a resume writer can achieve. Being recognized as “one of the best” by your peers is an accolade that very few get to savour. We are proud to introduce the TORI Awards to the resume writing and careers industry, because it highlights the work of members in our industry that so often get overlooked.”
Professional resume writers submitted entries for the TORI Awards in June, and a panel of the industry’s top writers were selected to judge the submissions. Up to six entries have been nominated in each category. The winning resumes and cover letters will be announced in October.
Career Directors International is raising the bar and setting new standards for Resume writers and career coaches worldwide. With more than 500 members, the organization provides continuing education, testing, and coaching for professional Resume writers and career coaches.
Adrienne Tom, the founder and Director of Career Impressions, is a Certified Professional Resume Writer (CPRW) and Employment Interview Professional (CEIP) with a Bachelor of Arts in English. As the principal writer at Career Impressions she was the very first CPRW in Calgary, Alberta, and is one of only three individuals in Alberta with the CEIP certification. In addition to her recent TORI Award nomination, Adrienne was the recipient of the Best Executive Resume Award of Excellence from the Career Professionals of Canada in 2011.
# # #

Share on TwitterShare on FacebookShare on PinterestShare on LinkedInShare on Email

Looking to take your executive resume or job search to the next level to land your next job faster and increase your earning power? I can help! Visit me online at CareerImpressions.ca to learn more about my award-winning resume writing, LinkedIn writing, and job search strategies for top professionals and executives located across Canada and the USA.
Posted in Executive Resume Writing, Miscellaneous